Who is Dan Mitchel?

Oregon Chimney Repair & Cleaning was founded in 1979 by a man named John Branch.  Sometime after this, Joe and Kathy Spurger purchased the company.  In 1985, Dan Mitchel started to work for the company.  He rapidly learned masonry skills and enjoyed the work.  By 1987, Oregon Chimney Repair & Cleaning was a small and struggling company, and Dan was going through his own financial difficulties.  His wife was undergoing cancer treatments and surgeries.  Not to mention, they had a young daughter to care for as well.

When he found out the Spurgers planned to sell the company, he worried he would no longer have a job.  After consulting with a good friend and CPA, he decided to take the plunge and buy Oregon Chimney.  From then on, he continued to perfect his own craft of masonry work and he quickly learned the ropes of managing a company and running crews.  Fast forward 33 years, Oregon Chimney Repair & Cleaning is one of the largest and top-producing chimney companies in Portland.

Dan’s stated purpose for Oregon Chimney is to provide high-quality workmanship to all customers in a professional and timely manner, leaving the customers fully satisfied with the service.  Through numerous reviews and customer feedback, it is clear that he has maintained this purpose throughout his tenure of ownership of Oregon Chimney.

Through the years, Dan has written internal policies for the company staff to follow.  These policies derived from his years of experience and his successes and failures in the company.  Most company policy surrounds the subject of professionalism and standards, including having all masons and helpers understand the definition of “standard”.  Customer service has always been his first priority.  The very first policy he wrote for Oregon Chimney is: “We do what we promised we would do.”

Today, Dan is still the owner and manager (with the help of his wife Colleen). He occasionally does his own estimates and he runs a crew of masons.  Dan loves to meet new people and talk to customers about their fireplace and chimney needs.  He is a native Oregonian and was born in the Dalles.  He spent some of his childhood in California, but he mostly grew up in Spokane, Washington.  His parents hailed from the Midwest with his father coming from Milwaukee, WI and his mother coming from a farming town called Burlington in Illinois.  Dan attended the University of Oregon and, after that, decided to make Oregon his forever home.  He now has three adult daughters and a step-daughter with his wife Colleen. 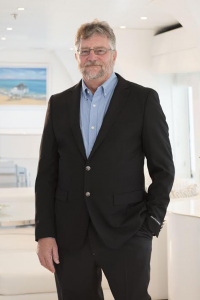